<– Back to Eagles in the News

New Eagle Scout Discovers a Way to Give Back to Peninsula Scouting in Perpetuity. 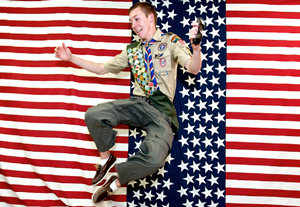 I reaffirm my allegiance, To the three promises of the Scout Oath. I thoughtfully recognize, And take upon myself, The obligations and responsibilities of an Eagle Scout.

On my honor, I will do my best, to make my training an example, my rank and influence count strongly for better Scouting and for better citizenship, in my troop, in my community, and in my contacts with other people.

To this I pledge my sacred honor.

Patrick Selover, Eagle Scout 2013, Troop 37 spoke the Eagle Scout Promise for the first time at his May Eagle Court of Honor.

He had recited the Scout Oath and Scout Law hundreds of times over the last five years at Scouting activities and meetings.

These new words, ” . . . to make my training an example, my rank and influence count strongly for better Scouting, and for better citizenship, in my troop, in my community . . . ” took on a special challenge and new opportunity for Patrick.

For more than three years prior, Patrick had been a member of the Silicon Valley Social Venture or “SV2” Teen Philanthropy Program. Launched in 2009, the SV2 Teen Philanthropy program offers a comprehensive philanthropic experience through which 6-12th grade children of SV2 Partners develop a deeper knowledge of the nonprofit sector and grant making, gain exposure to social issues and nonprofits, addressing them, and are inspired to make a bigger difference.

Patrick’s Grandfather, Jim Selover, attended Patrick’s Eagle Court of Honor. Jim was an active Boy Scout in his youth earning the rank of Life Scout. Growing up during WWII, all the adult Scouting leaders had been called to active duty. Jim was asked to lead his troop as the Jr. Assistant Scoutmaster. With no adult leaders, there were no merit badge counselors and thus Jim could not complete his final merit badges required for his Eagle Scout Award. But, Patrick’s Grandfather would add the final component to his Grandson’s personal goal — his 1941 “Handbook for Boys” with comments and signature from then Chief Scout Executive, James Edward West.

Patrick knew what he wanted to do. He would include a note in his Eagle Court of Honor invitation asking family and friends in lieu of gifts, to please make a gift to the Pacific Skyline Council Endowment Fund in the form of a James E. West Fellowship. (While a national recognition, all contributions remain in the local council’s endowment fund.) Patrick’s parents agreed to match contributions. If contributions exceeded $1,000, Patrick would receive a special certificate and square knot that can be worn on his Scout uniform and later on his adult leader’s Scout shirt.

On Sunday, May 11, 2013, Larry Christenson, Eagle Scout 1961, Council Endowment Committee Chair and VP of Eagle Scout Relations presented Patrick with his James E. West certificate and square knot — he had raised over $1,000 for the council’s endowment fund. His name has been added to the council’s growing online list of endowment donors.
Annually, the Pacific Skyline Council has about 150 new Eagle Scouts. It is Patrick’s hope that all new and past Eagle Scouts will consider a gift of $100, $250, $500, $1,000 or more to endow the future of Scouting and perhaps consider making a yearly contribution.
Annually, five percent of the council’s endowment fund is distributed to support council operations. Distributions currently represent 8% of council annual operations. The recommended national bench mark is 20%. The council receives no money is from the National BSA. In fact, the annual Scout registration fees are sent to the National office. Will you consider an endowment contribution to support local Peninsula Scouting? Your generosity will support generations of future young leaders! Thank you. Please contact Ron Chang, at (650) 341-5633 or ron.chang@scouting.org for more information or to make an endowment contribution.