<– Back to Eagles in the News It took a family tragedy and a world war to stop George Maher from becoming an Eagle Scout. It took a concerned co-worker, more than 60 years later, to set things right.

George Maher was in a rush to become an Eagle Scout.

The year was 1944 and George was a sixteen-year-old who had signed up to join the Navy to fight in World War II. Still, George wanted to get that Eagle Scout badge before he shipped out.

The hearing was scheduled for March 10, 1944. It started, but it never ended. George’s mother burst into the room to tell him his father was gravely ill and they had to get to the hospital immediately. He left without saying a word.

George went on to serve his country, get married, raise a family, even volunteer for the Boy Scouts.Those who know him say he always acted like an Eagle Scout. But George knew he wasn’t.

It wasn’t until he told his story to Mark Manchester of the Pacific Skyline Council, that the wheels started in motion to recognize George for what he accomplished so long ago.

A Redwood City Man Becomes an Eagle Scout at Age 85 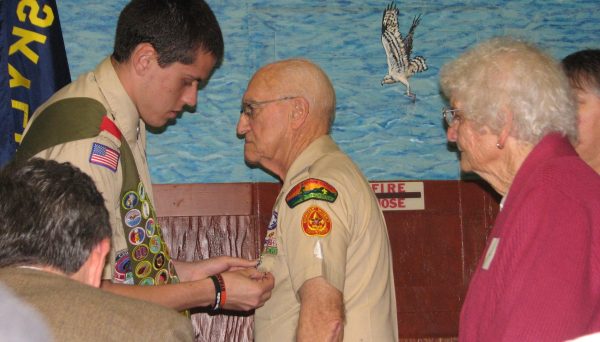 With utter clarity, George Maher can remember the first time he tried to get his Eagle Scout award. It was March 10, 1944, and he was three days short of his 17th birthday. The scene was the fourth floor of a school building in Queens.

Maher had all the merit badges. But halfway through his board of review, an assistant Scoutmaster for Troop 120 interrupted the meeting. Maher’s mother and uncle were at the door. Maher’s father, Patrick, was at the hospital with urgent heart problems. The elder Maher died that evening.

Within a month, Maher enlisted in the Navy to fight in World War II. His dreams of becoming an Eagle Scout were delayed for 68 years. Early next month in Palo Alto, that oversight will be corrected. The story is worth telling.

Few organizations — the Catholic Church is one — get worse coverage today than the Boy Scouts. It’s largely self-inflicted. The national organization’s stance toward gays defies one of the most significant political and cultural movements of our time.

But as an Eagle Scout myself — and the father of one — I can tell you I’ve never seen the issue of sexual orientation play any role in the camping and hiking at the heart of scouting. For me and my son, the experience taught volumes in patience and leadership.

George Maher, still a fit man at 85, studied at San Francisco State College after the war and worked as an engineer for PG&E, settling in Redwood City. He then did a stint with the Red Cross. For the last 25 years, he has volunteered at Scout offices, where he processes Eagle applications.

He thought about going back for his own Eagle. He once sent off a letter to New York scouting authorities that was returned marked “addressee unknown.” It wasn’t until a conversation early this year with Mark Manchester, the development director of the Scouts’ Pacific Skyline Council, that wheels turned.

Manchester had casually asked when Maher got his Eagle. And Maher told him the story. “It kept gnawing at us,” Manchester said. “I had to at least make a phone call.”

Maher might never have made the final hurdle had he not kept records of all his merit badges. Even then, he faced a problem. He was missing the card showing he was a Life Scout, the rank below Eagle.

As it happened, he had a decent excuse. In a massive storm off the Philippines in December 1944, Maher was nearly washed off the deck of his destroyer, the USS Prichett. When he pulled himself up, he was missing the wallet that held the Life card.

The storm is well-documented — it is sometimes called “Halsey’s Typhoon,” after Admiral William Halsey. So word arrived from Scout authorities. Maher was entitled to get his Eagle. As one of the oldest Eagle recipients ever, he’ll get his badge on Jan. 6, 2013 in a Boy Scout ceremony. The certificate will say March 10, 1944.

“When Mark told me it had come, I was shocked,” Maher told me. “It shows me the people in charge of Scouting follow through on things. If they determine you actually earned something, you should get it. I still find it hard to believe.”